The Keck Planet Finder (KPF) is a next-generation optical spectrometer in design for the W. M. Keck Observatory in Hawaii.  KPF will discover and characterize extrasolar planets using the radial velocity (RV) or Doppler spectroscopy technique, with a single measurement precision of <50 cm/s, and a goal of 30 cm/s. Drawing on two decades of experience and technical innovation in the field, KPF will be a powerful tool both for the discovery and follow-up of planets, and for unprecedented insight into stellar behaviors, filling a niche with its combination of large aperture and extreme precision in the Northern Hemisphere.

Orbiting planets cause stars to “wobble” in space, changing the color of light that astronomers observe. This method of detecting exoplanets is called the radial velocity method [Source: https://exoplanets.nasa.gov]

Similar to many other upcoming extreme precision RV instruments, KPF will be a stabilized, fiber-fed, high-resolution (R~90,000) spectrometer with a broad spectral grasp (445-870 nm). It has an asymmetric white pupil design, with an R4 echelle disperser and a VPH grism cross-disperser. Its unique features include a Zerodur-based design for maximum stability, image slicing for maximum throughput, a separate Ca H&K spectrometer and coverage of canonical lines for stellar activity mitigation, and most importantly, access to the large Keck aperture. Learn more about KPF instrumentation. 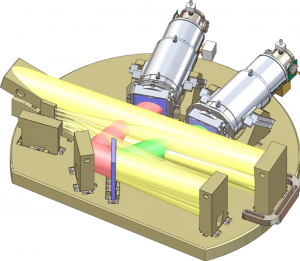 The KPF white pupil optomechanical design, with the optical elements supported by a Zerodur bench

KPF will be a broadly capable high-resolution optical spectrometer. Its primary science driver is to measure the masses and orbital properties of small planets including Earths, super-Earths, and sub-Neptunes that are known to be common from Doppler surveys and the Kepler mission. Given its ability to go red and go faint, KPF will excel at the characterization of transiting planets from missions such as Kepler, TESS, and PLATO. In addition, KPF will discover planets orbiting nearby bright stars, some of which are suitable for imaging and spectroscopy by next-generation instruments like WFIRST and 30-meter-class telescopes on the ground. Learn more about KPF science.

The roadmap of current and upcoming precision radial velocity instruments, including KPF.

The Keck Planet Finder is being built by a multi-institutional team that leverages a long history of instrumentation and exoplanet discovery. Learn more about the KPF team.

KPF successfully completed its preliminary design review in November 2017, and is currently in the detailed design phase. Expanding on the rich heritage of exoplanet science at Keck, this instrument is currently scheduled for science availability in 2022.